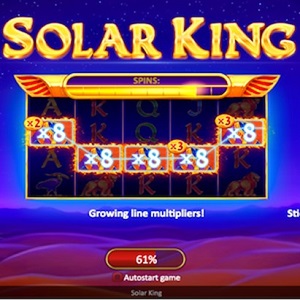 iGaming developers Playson have been leaning heavily into their Solar series of pokies. Each has featured an immaculate ancient Egyptian theme, and each has been met with a decent amount of success. The first in the series were Solar Queen and Solar Temple, now Solar King has been added to the growing catalogue.

As would be expected, Solar King also embraces everything ancient Egyptian, though this time focusing on a mighty king, as opposed to the more commonly seen Cleopatra. This choice in central character doesn’t make the title any less engaging, of course, and in fact makes it stand apart in a visual genre that is quickly becoming saturated.

A quick glance reveals that the 5-reel, 4 row pokie once again showcases the incredible artistic talent at Playson. All the expected imagery is present, and all of it shines with impressive detail.

All in all, players can once again expect to visit a land long forgotten, and drink in the stunning atmosphere.

A pokie set in ancient Egypt would hardly be complete without the expected cast of characters. Namely Horus, and the rest of the ancient gods. All are present, and all have been immaculately recreated for Solar King. The game’s background, meanwhile, stretches off into the desert, bathed in ghostly moonlight. It is all wonderful to behold, and proof of why the theme has survived for so long in the iGaming world.

In terms of gameplay the 95.45% RTP, 20 payline game shares a great deal with its predecessors. Though, some steps have been taken to shake up the formula. The majestic pharaoh stands tall above all other gods, occupying an entire reel and triggering massive payouts when he makes his appearance.

The biggest pokies payouts, however, are tied to the Flaming Frame mechanic. Flaming Frames have been a staple of the Solar series from the beginning, offering an interesting, visually impressive twist. A series of flaming overlays are placed across the reels, adding multipliers to the symbols that land within. Hence, a match created with a Flaming Frame is significantly more valuable.

But, of course, things in Solar King really start cooking during Free Spins. If 3 Scatters are matched, 15 Free Spins are granted, and Flaming Frames really start pay out big. During a Free Spins sequence the Frames will hold symbols in place. Then, on the last 5 Free Spins all Sun symbols will transform into Wilds.

Solar King is a fine effort from Playson, and an exceptional entry into the already popular Solar series of pokies.