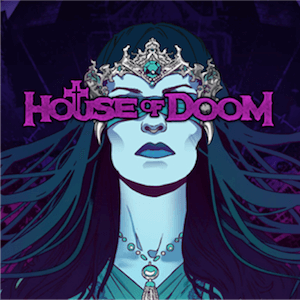 Many different online pokies have graced our computer and mobile screens. There is probably not a theme that hasn’t been explored; an idea that hasn’t been turned into 243 Ways To Win. Which is why it feels like a royal vacation when someone does manage to come up with a theme or premise that is completely fresh and original.

The creative minds at Play’n GO have done just that. We present to you: House of Doom! House of Doom is unlike any online pokies title that we’ve ever had the privilege of playing. It explores the racy and slightly underground world of heavy metal music, complete with brilliantly dark, head-banging guitar riffs and symbols from the occult. The musical score is performed by Stockholm-based heavy metal band Candlemass, a Swedish band that associates with the musical genre, doom metal.

As a matter of interest, the band’s track House of Doom was reportedly created especially for the Play’n GO’s newest release, and will also soon be released as an official single by the band.

House of Doom is the creative brainchild of Chief Operating Officer of Play’n GO, Martin Zettergren. It’s safe to assume that Zettergren may very well be a metal head himself, as he made very sure that the end product would be a suitable match for the new pokies release, right down to the point of being in studio with the band when the track was recorded.

Tamas Ujszaszi, games producer at Play’n GO, excitedly related how much fun it was for the software developers to have been involved in the entire process, including that of the creation of the signature sound track. Ujszaszi describes the experience of head banging along to the band’s antics with the rest of the team of software developers, as being truly unique and highly enjoyable indeed.

What makes the title truly different to everything that has been done up until this point in time, is that the game is centred on a specific genre of music, instead of a central idea or theme.

House of Doom will no doubt attract a diverse audience. Lovers of the genre of heavy metal music as well as those players who enjoy dark and mysterious undertones will all be attracted to House of Doom.

Its dark, its edgy, and it’s bound to become a huge hit!