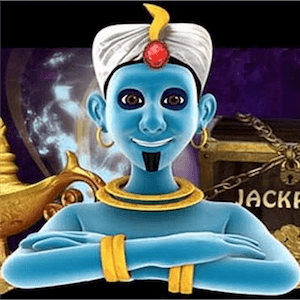 News of big progressive pokies wins always help to give players an incentive to take a few extra spins on their favourite online progressive pokie game. Now, the latest huge win will give pokies enthusiasts even more hope that they too could strike it rich, just like the one lucky player who won an incredible $2,086,781 jackpot on Millionaire Genie.

As with all new wins, no formal details have been released on the winner of the prize just yet. However, it has been confirmed that the Millionaire Genie Jackpot has indeed been hit, and it is the 36th time this jackpot has been paid out since it first hit the iGaming market back in 2010.

According to reliable industry sources, the average cash payout for the jackpot in question stands at $2,184,791, making the most recent payout almost exactly equal to the game’s usual prizes. The largest ever win recorded on Millionaire Genie was worth a whopping $5,194,129 – more than double the latest prize!

With a unique Arabic theme featuring a classic blue genie, Millionaire Genie is a popular progressive pokies game developed by Random Logic. The title features 5 reels and 15 paylines, and is loosely based on the age-old tale of Aladdin.

The symbols on the reels of the game are all related in some way to the theme, and include a spell book, a key, a snake, a bag full of coins, and the infamous lamp from which the genie appeared. The girl wrapped in a pink pashmina acts as a bonus symbol in the base game, while the genie is a scatter symbol and the ornate ‘MG’ logo acts as a wild.

The progressive jackpot in Millionaire Genie is triggered totally at random, and can appear on any winning or non-winning spin. No particular symbol combinations are needed to trigger it either, although it is important to note that the higher your bet per spin, the higher your chances of triggering the main progressive prize.

As well as this jackpot, this pokie also offers a free spins round for added winning potential. Landing just 3 or more scatters will award a random number of free spins, but the higher the number of scatters, the more free games will be granted. Random wilds will also be added to the reels throughout the round, remaining there until all of the free spins have played out.

Millionaire Genie is available for online and mobile play at all casinos offering Random Logic’s portfolio of award-winning games.