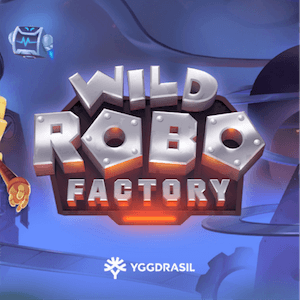 Wild Robo Factory has an immersive theme that features a world in which crazed robots have taken over a mechanised facility. This theme is carried through to every facet of the game, and striking visuals and well-designed symbols all work together to make it visually appealing. The robots that give the title its name are both menacing and lovable, and while these odd metal men seem to have evil intentions, they are simply too clumsy to cause any real harm.

In terms of gameplay, the new pokie has a 5 reel, 4-row setup, with 25 paylines. There are 12 different robots featured, but the symbol players will want to look out for is the Wild Robot. As is expected, this symbol can stand in for any other standard icon to create winning combinations.

But that isn’t all! Depending on where the Wild Robot lands, he can appear as Stacked, increasing player’s payout potential and triggering a unique animation. This cute and lucrative animated sequence will see him moving from row to row, until he exits on the left. For each stop he makes on the reels, he awards a free re-spin.

While the Wild in Wild Robo Factory may give your winnings a boost, it’s the Scatter Symbol that makes things really interesting. If 3 or more Scatter symbols land on the reels at once, a bonus mini-game is triggered. Players are then transported to the dark basement of the robotic factory, where the broken mechanised creatures have been sent to rot. But that doesn’t mean they aren’t still capable of helping out…

A certain number of free spins are granted in the basement, but this number can increase if luck is on the player’s side. Some Wilds can ‘malfunction,’ and send the rows into reverse. This sees robots that have already animated and marched off the left to be called back into action, allowing for multiple additional winning combinations to be formed.

The interesting design and engaging features work together to make Wild Robo Factory another smash hit from Yggdrasil Gaming. This new pokies game can be enjoyed on desktop or mobile, and it runs flawlessly on both platforms.