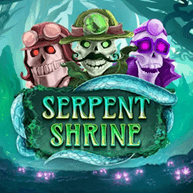 Once in a while a genuinely innovative and creative pokie comes along, defying expectations. Serpent Shrine from Fantasma Games is such a game, taking players on a remarkable adventure into a fantastically realised world. From the extensive and deep backstory, to mechanics that break new ground, it would be a mistake to pass up a chance to experience this one first hand.

The concept is that a group of explorers set about to investigate a mysterious forest, only to find a path that dove deep into the earth. After descending for what seemed like an eternity, the explorers found themselves inside a fantastical underground world, bristling with glowing crystals, and populated by a wonderland of mysterious creatures. Only, not all the creatures are friendly, and if they want to survive to tell their tale, the explorers will have to fight for their lives.

Pokies aren’t often this intricate, but the storyline behind Serpent Shrine is only the beginning.

When it comes to representing a magical underground world, Fantasma Games certainly have a talent. The background of Serpent Shrine depicts towering underground vistas, with gnarled trees and glowing flowers looking to be from another world. The symbols are equally as fascinating, with lanterns, valuable gems, and interesting characters tying in with the overall theme.

In terms of gameplay, many might be caught off guard when looking at the pokie’s reels. The vast grid seems only partially used at first glance, with strange blue gems dotted about. This is because Serpent Shrine isn’t afraid to toss conventions out the window, and try something entirely different.

At the start of each play session, only 5 reels and 3 rows will be used, appearing at the bottom of a much larger grid. But when a Butterfly Wild appears on the pokie’s reels, it will shoot upwards from its position, randomly opening up a new space. However, those strange gems dotted about act as deflectors, knocking butterflies into unpredictable locations. It is a fun, visually interesting feature, and certainly one that goes a long way to making the game stand apart.

Big payouts are triggered as would be expected; by managing to unlock every available space. When this happens, 5 Snake Free Spins are triggered, making use of the entire grid.

Serpent Shrine is a triumph in the iGaming world, embracing creativity in a way not commonly seen in other pokies. It is, without question, a must try game.