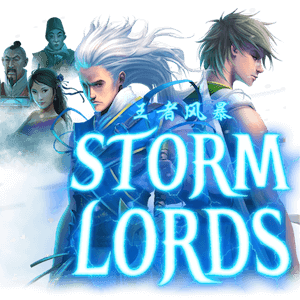 Storm Lords features an entertaining audio-visual experience as well as an array of interesting game features and exciting ways to win. These include re-spins, free spins, stacked and sticky Wilds, treasure coin bonuses, and more.  Players can choose between 1 and 50 paylines, with a betting range of between 0.01 and 125 credits per line, and a maximum payout of 800 times the wager.

While the Storm Lords soundtrack is relatively simple, it is dramatic enough to complement the theme and bold, anime-style graphics well. The reels are set within the edifice of a small grey temple, dusted with snow and flanked on either side by bright cauldrons of flame. In the background, players can see the bright pink blossoms of the cherry tree synonymous with spring time in the Far East.

In addition to the two imposing, sword-brandishing heroes of the pokie, Storm Lords’ symbols include a princess, a priest, an emperor, cold coins, an emerald amulet, and gleaming steel high-value playing card symbols. The Storm Lords, which only appear on Reels 2 and 4, become animated when stacked for a more visually engaging game experience.

The emerald amulet, meanwhile, serves as the Storm Lords Scatter symbol. Landing amulet Scatters triggers a choice of two free spins bonuses, each featuring six free spins. One of these includes sticky Wilds on the second and fourth reels, while the other features sticky treasure coins on the fifth reel. An appealing feature is the fact that the aforementioned treasure coin bonuses can be triggered during free spins.

The most valuable symbols in the pokie are the two titular Storm Lords, who serve as the Wild Symbols. Although they only appear on the second and fourth reels, they can become stacked on their respective reels. This greatly increases their potential to pay out winning combinations since they can stand in for any other symbol except the amulet Scatter.

This hot new pokie looks set to thrill and can be enjoyed on desktop and mobile at all RTG powered casinos.