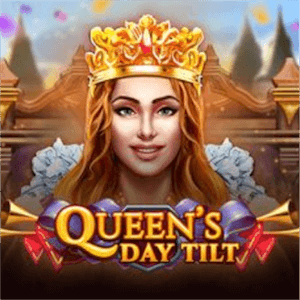 Play’n GO certainly has elected to go an unusual route with their new Queen’s Day Tilt pokie. We’re not referring to the fact that it was released on Valentine’s Day, but has absolutely nothing to do with Cupid’s high-day or the month of love, but rather that it only has 3 reels. At first glance, because of the simple outlook of the game, it’s easy to assume that this is going to be just another retro-style pokie. But, really, it’s much more than that.

This is a game based on the age-old tales of wars and riches and regal royalty, and here, Her Royal Highness the Queen is completely in charge. When she speaks, her underlings listen. Despite the simple nature of the game, it’s still a fully developed online video pokie. And ultimately, it’s the very simple functionality of the title that makes it so enjoyable.

Winning Is Easy With The Queen

It’s a simple pokie, and to boot, it’s really easy to win. Whenever any two or more symbols touch – horizontally or vertically – it’s a win.  This is the making of a game that will appeal to newbies and more seasoned players alike. Because irrespective of how long anyone has been playing, who here doesn’t enjoy an easy win every once in a while?

But what happens when 3 matching symbols are landed on a single row? This is when things really start to happen, because at this point, a wild symbol appears on the grid. Being a 3x3 grid, it doesn’t take much more than a single wild to make for some pretty impressive wins. Despite the fact that the pokie can be quite volatile at times, the Return to Player percentage is set at a fair 96.36%.

And how about that 5000x bet multiplier? Not bad as far as jackpot payouts go.

All The Queen’s Features

Two special features are at the order of the day, namely the Ruler Feature and the Tilt Feature. The game’s wild symbol is the Queen, and HRH will make a star appearance at random intervals, or whenever 3 matching symbols appear on the reels on a single payline. The Queen is the main woman in charge in the Ruler Feature, as well as in her royal kingdom at large.

In the very lucky instance that only one symbol remains on the reels after the rest have been coupled up, the symbol will disappear, and the free spins bonus round will magically kick into action.

We enjoyed Queen’s Day Tilt. Don’t be fooled into thinking that the simplicity of the pokie will take something away from the enjoyment, because it really doesn’t.