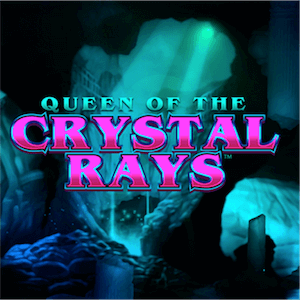 Leading online casino game developer Microgaming has introduced yet another 6 reel pokie to its already-impressive portfolio. The developer produced its latest release, entitled Queen of the Crystal Rays, in partnership with Crazy Tooth Studios. The visually engaging pokie promises a powerful sensory experience combined with a host of features to enhance players’ fun as well as their potential to win big prizes.

In keeping with the game’s title, the Queen of the Crystal Rays features a sparkling colour scheme of neon pinks, blues, purples, greens and yellows, offset against the shadowy backdrop of an ancient temple. The otherworldly experience suggested by the visuals is further underscored by the haunting soundtrack, which invokes the feeling of an enchanted realm of myth and magic.

Something For The Senses

Reigning over the reels is the beautiful Crystal Queen herself – flaxen-haired, ethereally attired and bejewelled, she is exactly what we’ve come to expect from Microgaming heroines. She is surrounded by an array of glittering symbols – including glowing gemstones, treasure chests, and ornate decorations – to complete her mystical kingdom.

With the possibility of winning up to 2 500 times the initial bet, the Queen of the Crystal Rays is sure to be a big hit with players who prefer large jackpots. The Any Adjacent Wins system further enhances players’ odds of success on this 50-payline, six-by-four video pokie.

Players also benefit from wilds, free spins, scatter symbols, the Queen of the Crystal Rays Bonus, and the Chrystal Ray Feature when they play this game.

During the Crystal Ray Feature, which can be activated at random during any spin, the reels expand to double their size as rays of light scatter across the screen. When the reels stop spinning, certain symbols may be converted into wilds or double multipliers, really ramping up players’ payout potential.

Meanwhile, if players land 3 or more scatter symbols anywhere on the reels in a single spin, they will trigger the Bonus Round, which is composed of four special rounds. In these rounds, players stand the chance to win a range of exciting prizes, including multiplier crystals and sizeable cash payouts, among others.

More in Store from Microgaming

Microgaming, which is said to have launched the first genuine online casino in 1994, is nothing if not prolific as it rolls out new pokies every month. In addition to the Queen of the Crystal Rays, several other brand new titles have been released over the past two months. These include Magic of the Sahara, Village People: Macho Movers, Break Away, Ruby Casino Queen and Tiki Vikings, with plenty more in store in the very near future.

Meanwhile, Crazy Tooth Studio, which launched its hit pokie, Arctic Valour back in February, is currently working on several new games, including The Incredible Balloon Machine, and several as-yet-untitled projects, with the studio’s website hinting at a super hero theme and harnessing the power of the elements.