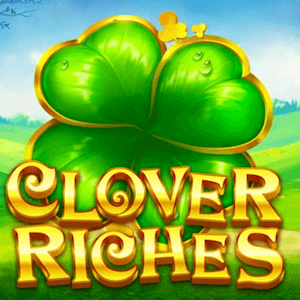 Fans of Irish themed online pokies will love the latest release from the studios of Playson. The iGaming software supplier is out to charm is players with its latest release, a particularly lucky pokie by the name of Clover Riches.

The emerald casino game plays out over 5 reels, 3 rows and 10 paylines. Its design is a nod to the rolling green hills of Ireland and the local belief that 4-leafed clovers can bring you all the luck you need to find hefty pots of gold there. Also on offer is a generous array of multipliers, free spins and bonus symbols to help you win.

The Malta-based pokies specialist’s newest game plays out over a beautiful backdrop of a green meadow, with blue skies above and colourful icons filling the reels. Symbols to land include green top hats, golden horseshoes, pots of gold and treasure, beer tankards, toadstools, and a range of lower valued royal symbols.

The Wild in Clover Riches has the power to fill in for all of these base game icons, except of course for the Bonus symbol. This symbol adds a double multiplier to all wins in which it appears too, giving you plenty of chances to score wins worthy of a Leprechaun.

The volatility of this thrilling game also depends on which free spins package is selected. This amps up the excitement factor for online and mobile players alike, while also bringing them plenty of lucrative winning chances. In the round, the bonus clover delivers between 1 and 5 extra free spins too, helping you to extend the fun indefinitely!

Playson Comments on the Release

Commenting on the new release, Head of Product at Playson Vsevolod Lapin said that the game offers smooth playability and colourful photorealistic graphics that are sure to transport players to the Emerald Isle as they win awesome prizes. With plenty of features to entertain players of all walks of life, he said, Playson is confident that Clover Riches will be a big hit among its casino partners.

Playson’s new release has come on the heels of its recent trip to the Central and Eastern European Gaming Conference (CEEGC) in Budapest, Hungary on September 24. The firm’s general counsel took part in a panel discussion called ‘Compliance Versus Innovation’, while the rest of the team congratulated the lucky winner who bagged €8,000 at its latest Grand Prix tournament. The September 17-25 event attracted nearly 25,000 fans at 240 casinos and showcased 8 of Playson’s most popular pokies.