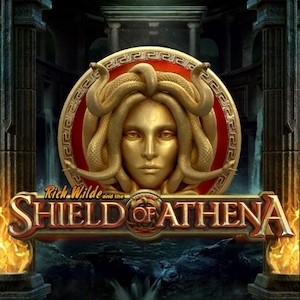 Play’n GO’s popular hero Rich Wilde is back, and this time round, he’s out on a mystical adventure of Greek mythology, magic and the power of surprise. The Swedish developer’s new Rich Wilde and the Shield of Athena pokie is the 5th instalment in the popular series of hero-centric Rich Wilde online pokies games.

Our man is this time round joined by daughter Cat Wilde as the famous dad and his offspring make their way across the world and all the way to the island of Atlantis. They are in search of a very special and super-powerful artefact and weapon: The Shield of Athena, bearing the famous and fear-inducing snake head belonging to the gorgon Medusa.

A 3x5 set of reels and rows feature 10 fixed paylines and a Return to Player percentage of 96.25%. Special features in Rich Wilde and the Shield of Athena include Medusa Respins and Medusa’s Gaze Free Spins – with a maximum jackpot payout of up to 10,000x the player’s bet! Now that’s textbook Rich Wilde if ever there were such a thing.

Rich Wilde and the Shield of Athena’s symbols are beautifully designed and crafted, and of course every last one inspired by Greek mythology. Play’n GO are masters of the storytelling theme and this shines through yet again. Symbols include a Golden Owl, the prestigious Pendant of Courage, the coveted Ring of Wisdom, the powerful Helm of Athena, the enemy-defying Shield of Athena, and a set of 10 – A royals.

The Shield of Athena is a crucial pokies symbol as the shield transforms into a Wild symbol whenever the Respins feature is in play. Landing a total of 5 shields on a single payline can potentially see the player pocket up to 500x his or her original bet! What’s more, this doubles when transforming into a Wild Shield!

Our man Rich Wilde is the game’s standard Wild symbol, with daughter Cat posing as the game’s scatter on the pokie’s reels. Our hero substitutes for all symbols save for daughter Cat. Cat is of course in turn the special key that unlocks the door that guards the Medusa’s Gaze free spins feature.

Rich Wilde was and remains a beloved and popular pokies character, and now that he’s just embarked on a whole new adventure, complete with a brand-new setting and theme, players are bound to fall in love with him all over again.