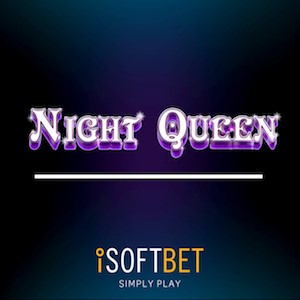 Fans of games with a Gothic theme and feel will be happy to know that first-class software developer iSoftBet is ready to make their day with a brand-new Gothic fiction online pokie. Night Queen was released by the studio late in June and continues to make waves as one of the hottest new online pokies to have hit the iGaming space so far this year.

Night Queen is a mystery-filled adventure of royalty and intrigue and follows hot on the heels of previous new releases Dragon Match Megaways, Euphoria, and Hot Shot 2.

Fully compatible with mobile technology, iSoftBet’s Night Queen features a 5x3 grid and 20 paylines as part of its base-game setup. Since the paylines are fixed, the minimum playable bet starts out at 0.20 currency credits. The maximum allowable bet has been set at 20.00 currency credits for a single spin of the reels.

The highest paying of the themed symbols is the Night Queen herself. A five-in-a-row combination carries a cool $100 payout when played at maximum bet. Other themed symbols include a mysterious-looking man, a horse, and, of course, a raven. These pay $80, $70, and $60 each for a full-house combination on the reels.

Lower-paying symbols are represented by standard playing cards and these number five playing card symbols in total. Special bonus symbols in the online pokie include a wild and a scatter.

The new online pokie comes standard with several impressive special features built into its workings. First up is the Super Stacks Feature, which will at random cause several standard symbols to be stacked during base-play.

There’s also a Switching Stacks Feature. This feature can potentially swap entire stacks of symbols, causing them to trade places on the reels so as to deliver even more and higher winnings.

An added bonus is that when identical symbols are fully stacked and at the same time appear on three or more adjacent reels, the entire set is instantly transformed into a single Colossal symbol. But that’s not all, because when this happens, a Colossal Multiplier value will instantly be awarded. The value is awarded at random and can potentially run up to a maximum multiplier value of an incredible 30x the player’s bet based on the value caused by the stacked now-colossal symbol.

Wilds are presented in the shape of a heart and will substitute for all standard symbols so as to form winning combinations.

Night Queen is an exceptional online pokie that looks set to be a player favourite for time to come. It can be enjoyed on desktop and mobile so it’s accessible to players on all platforms too.