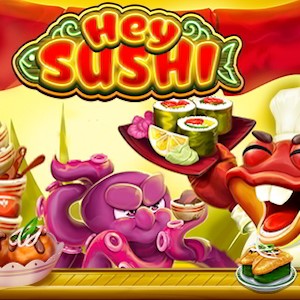 Pokies development studio Habanero Systems have revealed their new creation, and it happens to be a delicious one. Called Hey Sushi, the new online pokie is based around a theme of everyone’s favourite raw fish delicacy, which is already enough to get many players sitting up and licking their lips. But, of course, spinning the reels is not just about getting mouths watering, it’s also about offering up the chance for big cash payouts.

The core concept of the pokie is simple; the player is sitting at a sushi buffet, and given the choice to try out whatever tasty treat they desire. That the buffet seems to be run by a cheeky anthropomorphic crab is another story, and left up to the player’s imagination. Either way, Hey Sushi asks the player to befriend the crab chef, help themselves to some delicious treats, and dream about which sushi dish they’d like to try out next.

In terms of the basics, Hey Sushi is a 5-reel pokie with 25 fixed paylines. As already guessed, each symbol is a lovingly crafted artistic representation of a real sushi dish. All the favourites are here, including hand rolls, mako rolls, and nigiri, with each having had a very talented artist digitise them into a pokie. All in all, the graphics in the game are all finely detailed and lovingly crafted in HD.

As far as features and bonuses go, Hey Sushi sticks to the tried and trusted formulas. Scatters, Free Spins and Wilds make up the core mechanics, which may not be ground breaking, but go a long way to adding some exciting gameplay to the tantalising visuals. Multipliers also make an appearance, with the maximum granting potential payouts of up to 15x the original wager.

A Feast For The Eyes

Arcangelo Lonoce spoke on behalf of Habanero, making a few light-hearted remarks regarding the new online pokie’s launch. He declared that the developer was thrilled to have finally released their latest title to the public, and promised that the game contained not only delightful symbol designs and excellent mechanics, but also an entirely original soundtrack.

He went on to jokingly suggest that even disciplined players on a diet would struggle to save Hey Sushi for last, given how tantalising every item on the menu was.

This tasty new online pokie is now live and accessible on both desktop and mobile devices.