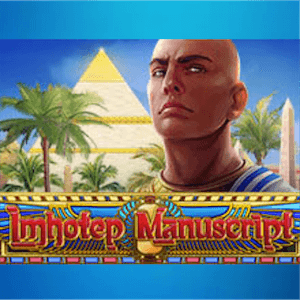 The developing ‘magical books’ subgenre of ancient Egyptian-themed online pokies received a boost with the launch of Fugaso’s Imhotep Manuscript. The game has 7 reels and 9 fixed paylines.

The title refers to the man whom history remembers as the pharaoh Djoser’s chancellor. He commonly is thought of as the architect of the king’s famous stepped pyramid.

Along with a number of reels not usually seen, the pokie, which sets the action amid gilded, bejewelled finery and lush greenery, also has a couple of bonus features. A Multiplier Wild can substitute for other symbols when able to complete winning combinations. It then can increase the payout with a multiplier of between 1x and 6x.

Scatter symbols can award between 10 and 25 Free Spins. Among the other symbols are playing cards, pyramids, a young Imhotep, a golden funerary mask, and the sacred manuscript.

The Man Who Became a God

While pyramids are not exclusive to Egypt, those at Giza and elsewhere have been the country’s most famous symbols for millennia. Their grandeur is so impressive, it is easy to understand why the knowledge required to construct them was regarded as sacred, divine knowledge.

It also becomes easy to understand how, in the 3000 years following his death, commoners and royalty alike began to regard Imhotep, whose name means ‘the one who comes in peace’, as a god.

He lived sometime during the 27th century BCE, and in addition to being Djoser’s chancellor, he also was the high priest of Ra in the town of Heliopolis. Later traditions claim he was a physician, and that he authored wisdom texts. His tomb has never been found. The only other commoner who received the ultimate honour of deification was Amenhotep, the son of Hapu.

Founded in Russia in 2001, Future Gaming Solutions, better known as Fugaso, is famous as a provider of top-quality online pokies. However, the company also has integration and white label offerings.

Fugaso is licensed by the Malta Gaming Authority, the UK Gambling Commission, and the government of Curacao. Among the provider’s previous releases are titles such as Sahara’s Dreams, Robbie Jones, Mr Toxicus, and Yazuka. Its portfolio includes approximately 60 different games, some of which show a more daring side to the provider. Political humour comes to the fore in Trump It Deluxe, while Stoned Jokers has a few surprises lurking between traditional fruit symbols