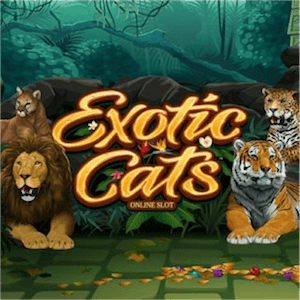 Award-winning software provider Microgaming has let the cats out of the bag – all 5 of them, in fact, and they have got big things in store for players. The provider unveiled its new Exotic Cats online pokies machine in August.

A lush jungle setting is where the game’s 5 reels and 243 Ways to Win lie in wait for those who want to see if they can land Vertical Wilds, Scatters, and symbol combinations that win. True to form, the industry leader’s latest offering is replete with vivid graphics and surprising animations.

There is no doubt the provider hopes the recently-launched title will appeal to the feline fanciers among players. However, Microgaming has ensured Exotic Cats also caters to those who appreciate pokies action peppered with creative bonus features.

Having 243 Ways to Win means the pokie does not have traditional paylines, so the number of winning ways cannot be adjusted. However, players have some flexibility when it comes to game credits’ monetary value, as well as to the number of credits bet per spin.

The minimum amount at which Exotic Cats can be played is 0.15, and the maximum bet per spin is 30.00. The change of payline structure also means winning combinations can be formed by symbols simply appearing on adjacent reels.

Each reel is guarded by one of the animals referred to in the title, but they are not the only things that stalk the reels. Players will also see a woman, pawprints, a coin, and the 4 playing card suit symbols of hearts, diamonds, clubs, and spades.

Reel 1 is ruled by a lion, 2 a tiger, 3 a panther, 4 a leopard, and 5 a cougar. Even so, the felines can appear on one another’s reels. Whenever 1 lands on the reel it rules, every position on it becomes Wild. This means it is possible to see all 5 turn Wild simultaneously.

Microgaming was understandably proud of its latest pokies offering, and appeared particularly pleased with its Vertical Wilds feature. According to provider game publisher David Reynolds, the feature offered chances at impressive rewards.

He added that the title’s low minimum bet and high winning potential made it an optimal choice for new players. According to Reynolds, it is also aimed at experienced players, especially those who were looking for lucrative bonus features.