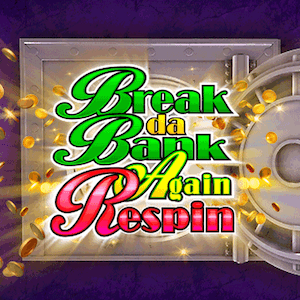 Fans of Microgaming’s popular Break da Bank series of pokies will be ecstatic to learn that the casino giant has just released the 3rd instalment in the highly popular series of online games. It’s called Break da Bank Again Respin and it was developed for the gaming powerhouse by independent development studio partner Gameburger Studios. The new release features 5 reels and 9 paylines and is officially the first game to be released by Gameburger under the Microgaming banner.

According to a recent online press released published by Microgaming on its official home page, the latest instalment in the Break da Bank series of pokies intends to elaborate further on the signature features included in the first two instalments in the popular series.

Its immediately obvious upon launching the new release that all of the signature elements have indeed been included in Break da Bank Again Respin. Players are treated to the possibility of up to 25 free spins and a collection of strategic paid respins incorporated as part of the proprietary Hyperspins™ feature; with everything perfectly complimented by the ability to develop one’s own custom-pokies-strategy thanks to a feature allowing for higher-stakes-play that makes it possible to trigger more free spins more often.

The customisation ability is made possible by the inclusion of a brand-new Respin mechanic. Break da Bank Again Respin is the coming together of the best of the elements of the popular series and the game is a celebration of truly intuitive play.

They’re Up To The Task

Gameburger Studios certainly proved itself well-able and up to the task of developing a sterling new Microgaming-branded game. Gameburger is the newest addition to the Microgaming independent studio partner family and its not difficult to see why the team managed to meet the development giant’s sky-high standards.

The idea behind the inclusion of Gameburger Studios, said Microgaming in their official introductory media release, is to introduce American-style gaming to non-American gamers. Judging by the quality of the latest pokies release, Microgaming has yet again hit the mark.

Break da Bank Again Respin is now available exclusively at all Microgaming-licensed operators. The game is bound to become a cult classic among fans of online pokies.