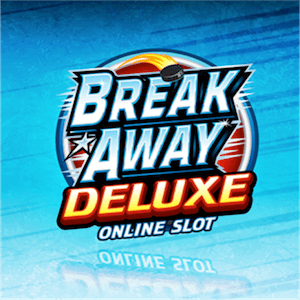 Fans of the Microgaming’s Ice Hockey themed video pokie Break Away have something to celebrate. The developer has announced the release of Break Away Deluxe, the updated sequel to the smash hit game with bigger payouts, more paylines and even more bonus features.

While it can be seen as a sequel, the deluxe version of Break Away plays like an entirely different pokies game, although the Ice Hockey theme remains the same. The graphics have been updated a bit and the fluidity of the pokie is noticeable. Initially, the action kicks off across 5 reels with 5 rows, a rolling reels mechanism and a choice of paylines ranging from 18 to 88. There is also a multiplier trail that can top out at 8x your total bet.

At the start of each new spin, the pokie allows you to select your payline and bet range accordingly. You have the option of selecting 18, 38, 68 or 88 lines with a full range of coin values and bet levels. The first noticeable feature in the new release is the rolling reels mechanism. This is active in the base game and where symbols involved in a win will disappear and the reels will continue to roll to uncover more symbols to possibly create another win.

The logo acts a substitute symbol on reels 3, 4 and 5 and there is also the addition of a Wild symbol that becomes active in the free spins bonus round. This is no ordinary Wild though. It comes super-stacked and increases in size after every spin, hence the name “Growing Wild”.

Break Away Deluxe also feature a Smashing Wild feature that activates randomly during the base game. It will land somewhere on the middle three reels and guarantee a win when it appears. The final bonus feature in the Deluxe version is the free spins bonus that is triggered by the puck icon. 12 spins are awarded with multipliers increasing via the rolling reels. It is possible to increase to an 8x multiplier on a line win.

Available for desktop and mobile, this hot new pokie is set to be just as big, if not bigger than its predecessor!