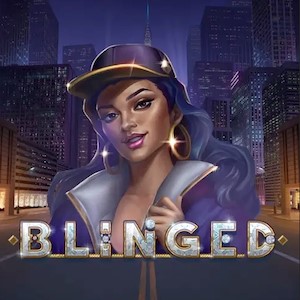 Powerful female rappers and bold urban women are put under the spotlight in a new online pokie from Play’n Go. Blinged is rhinestone-encrusted successor to Pimped, a 2015 game that focused on male rappers.

The new release has a 5x3 reel grid with 10 paylines, and its release comes at a time when artists such as Megan Thee Stallion, Doja Cat, and Cardi B not only make headlines, but climb the music charts as well. It also is a time in which diversity and representation is being examined in various forms of media.

True to the provider’s approach to video pokies, Blinged has several bonus features, one of which is the Win Spins mechanism. Play’n GO’s chief product officer, Martin Zettergren said that the rap music-themed release follows the launch of adventure and sport slots, as well as two Bingo games. He added that the recently released online pokie is packed with attitude, and that the Win Spin feature added additional excitement to the traditional gameplay that play know and love.

Blinged’s 5 reels feature symbols such as a cap-wearing rapper, a trio of women, a ring of gold and diamonds, gold sneakers, wads of banknotes, the rapper wearing a Wild cap, and a huge diamond Scatter. The lower value symbols include 10, J, Q, K, and A playing cards.

The Win Spins feature is triggered whenever 2 or 3 Scatters land on the reels. The number of Win Spins, which a Free Spins with guaranteed wins or respins, varies between 1 and 5. Win Spins can be retriggered if they produce more Scatters. Players can win up to 20 consecutive Win Spins. Respins that are triggered by non-winning Win Spins increase the Multiplier by 1.

The Blinged Wild symbol can substitute for any of the online pokie’s regular symbols. This happens if it lands in a position in which it can help higher or lower value symbols complete or expand a paying combination.

Play’n GO was founded in Sweden in 2007, and the company since has grown into one of the most popular and trusted online casino providers. The provider’s software is licensed by the Malta Gaming Authority and by other trusted regulators.

The online pokies games released by the brand are developed in HTML5, which ensures they are compatible with a range of platforms. This means that Blinged can be enjoyed on desktop or mobile.