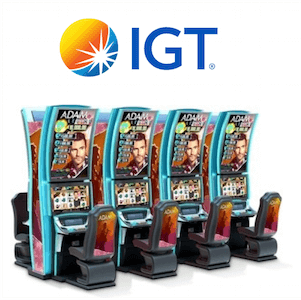 International Game Technology, better known as IGT, is all about creating a fabulous on-site casino experience. The company is renowned for its famous pokies cabinets and casinos are spoilt for choice when it comes to variety. The designers and software developers at the organisation have really gone to town in terms of ideas and effective implementation, and have created a range of products that can only be described as superb gaming entertainment of top-class quality.

The company recently announced the release of two brand new games, one of which is based on the popular television show The Price Is Right, and the other on the life and career of singer-songwriter Adam Levine. Both releases were recently unveiled at G2E Las Vegas.

A Three-Way Price Is Right Show

IGT’s The Price Is Right Showdown will be available on the company’s MegaTower Universal cabinet, which is a highly popular instalment at many casinos. The cabinet lives up to its name and stands eleven feet tall. It’s the perfect home to a popular TV game show-based pokie aiming at placing players at the centre of their very own showdown. Bonus events, spinning the Big Wheel, five paylines, grand prizes are all part of the package.

Also part of the package is The Price Is Right video pokies. This release can be accessed on IGT’s CrystalCurve ULTRA cabinet, and incorporates a progressive jackpot. Famous television host and comedian Drew Carey plays the amicable host and players will be able to enjoy many of the game show’s famous featured games such as Rat Race, Cliff Hangers, and Punch A Bunch.

Then, there is also The Price Is Right, housed in the company’s CrystalDual+Stepper cabinet. This is a classic mechanical reel machine and promises to transport players back to the heyday of the casino industry.

Get Your Groove On

The Adam Levine video pokie has been incorporated into the CrystalCurve ULTRA cabinet, and fans of the singer will be able to enjoy multiple clips from the main man’s career, including concert imagery. A feature that is bound to become highly popular amongst players is the game’s Jukebox functionality, which allows players to select their favourite Maroon 5 hit track, which will play in the background as the 6-level jackpot rounds progress.