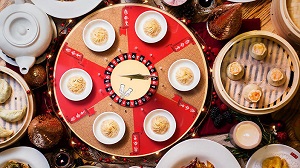 Gambling has been a part of human nature for a long time, and perhaps picking an item of food to eat through the ages was also a gamble – is it a berry or a poison berry, is this leaf going to cause a rash? The odds are 50/50!

We’ve come a long way since having to rely on gut instinct and hope when picking our food, but it seems like we still like to gamble with what we eat. Enter the hot new trend of Food Roulette, the latest in edible risk taking, without risking your life. The aim of this trend is to give diners a few choices of food items, with one of them hiding a spicy centre or chilli surprise.

Recent Food Roulette offerings include pizza, sushi and dumplings, and we went in search of where you can play this game of chance and take a gamble with your taste buds.

A pizza chain in New Zealand has recently introduced pizza Roulette. The pizza chain is called Hell, so you do not need an imagination to figure out their aim.

Hell’s version of Food Roulette offers you a pizza pie that has only one slice covered in their 3am reserve hot pepper oil. Diners can then spin the pizza and take a shot at avoiding the unlucky hot piece, the diner who bites the hot piece of pizza loses a layer of tongue, but fun is had all round.

With the 3am reserve pepper oil ranking 2,000,000 on the Scoville scale, it is the same as eating pepper spray and said to be 1000 times stronger than a Jalapeno pepper.  With this pizza being supplied in a coffin shape box, the obvious inference is that your tongue is about to attend its own funeral.

Popular dumpling house Din Tai Fung, located in Sydney and Melbourne has recently started offering diners a chance to take part in their Spicy Dumpling Roulette challenge. Six diners take the challenge, each taking a turn to spin the dumpling dial to see which dumpling they end up with. The loser - or winner if you enjoy pepper - ends up with the xialongbao soup dumpling, which is made with one of the hottest chilli’s in the world – the Carolina Reaper Chilli.

Another popular restaurant, Wagaya in New South Wales, was one of the first to 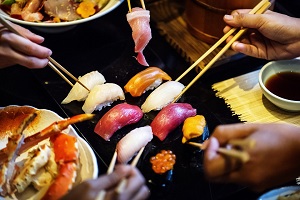 Offer Food Roulette to their diners, again with six items of food making up the game. One of these pieces of sushi has been loaded with wasabi, so patrons can expect some tears to flow.

Daniel San’s, Manly in Sydney has taken the sushi Roulette a step further by hiding multiple wasabi bombs inside a 24 piece sushi platter. So all players/diners can get an extra chance or two to hit a hot piece.

The restaurant Shizen Vegan Sushi Bar & Izakaya, in San Francisco, offers the surprise-ending roll, consisting on six identical pieces of beetroot sushi surrounding a shot of sake. One of these pieces of sushi is super spicy, but it’s a lot less intense than most other offerings. This challenge is not as extreme as the other restaurants options, so it’s a good starting point!

Though not a permanent fixture at Neutral Bays SoCal restaurant, if you are lucky, on Cinco de Mayo you can try out some great tacos, and one out of the four tacos will burn like hell. These tacos will make a life changing impact on diners – you may not want another taco ever again (or you may be hooked).

The Manhattan Fish Market offers a great starter, Oyster Roulette. Diners get a starter with four oyster shooters on ice, with one of those being super spicy.  This is a great way to add a daring element to your meal, and the spicy oyster shot will do you no harm.

This latest food craze may have some people scratching their heads and wondering why anyone would want to risk their tongue, but with online crazes like the cinnamon challenge, Food Roulette is not that unusual. While the cinnamon challenge can actually cause health issues (trying to eat a powder can lead to inhaling the powder causing broncho-spasms) the worst you can do with extreme spicy food is suffer a burnt tongue for a few hours.

People have always loved a bit of a thrill, so there is no surprise on the rise of this popular food trend. Would you give it a spin?